Sensō-ji Temple
Japan has two stereotypes: it is the land of crazy technological advance, of beeps and buzzes and bells; and it is the mystical imperial superpower of the samurai. If Akibahara takes care of the first image, the ancient temple at Senso-ji certainly looks after the second – founded in the 7th Century in honour of the bodhisattva Kannon. 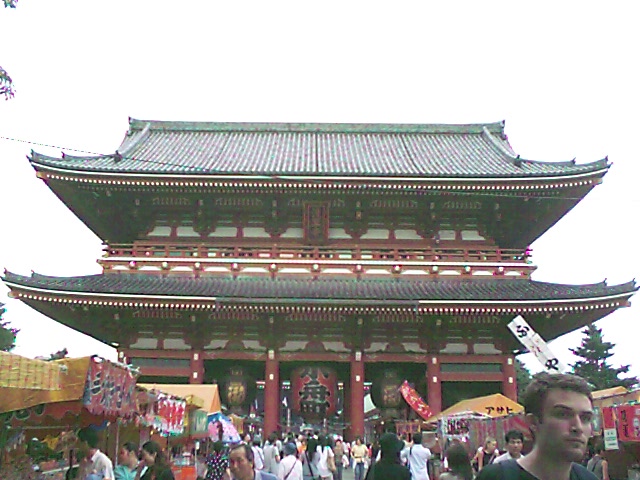 Sensō-ji is a place that can strike an almight fear into you. Although we had already been in the most crowded of city centres on more than one occasion, nowhere had people been more densely packed together than at the endless little stalls at the temple. There is the constant sound of sizzling: if you have ever been to a Catholic pilgrimage site like Fatima, and seen the endless grills with gallons of melted candlewax sizzling over charred metals, you’ll have a reasonable idea of what it was like. Throw in the smell of smoked meats burnt to the bone (some sort of sacrifice) and imagine the smell more pungent and concentrated and that’s how the temple smells.

There’s also something mightily scary of the aura of the place. With the constant smell of roasting and multitude of small, intense sources of heat, the shape of the temple and some of the decor around it become far more imposing places. One sees the shape and feels the heat and can’t help but wonder if this is what it would be like to be burned at the stake by Hasekura Tsunenaga [3] and his mob.

So ancient is the temple that the hundreds of decorative engraved swastikas along each edge of the roofing inspires a far greater fear than its usual connotation: the unknown. 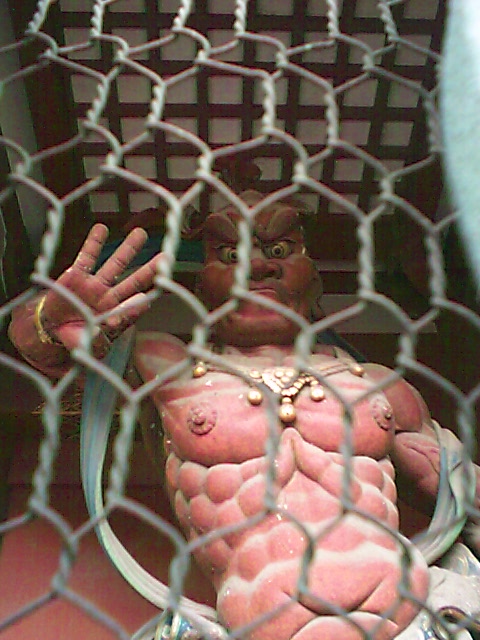 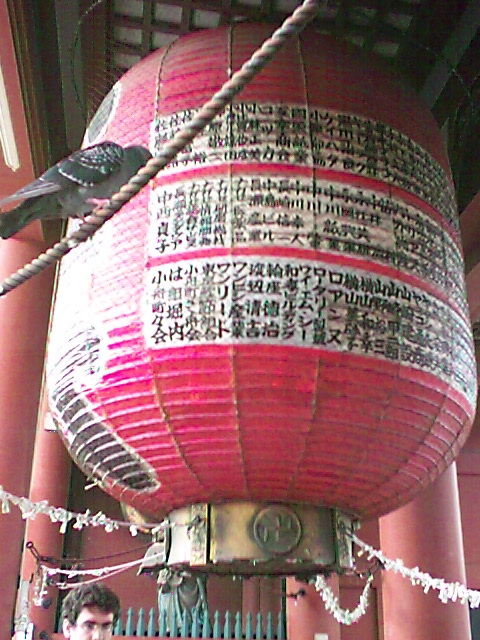 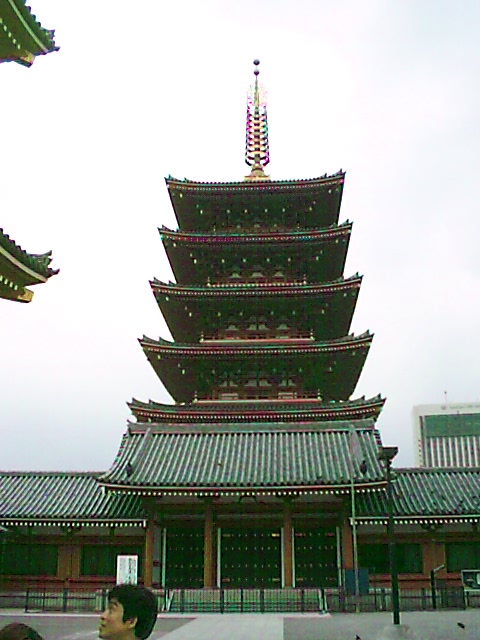 We also visited Disneyland Tokyo (conclusion: far better than the one in Paris – the Japanese Space Mountain is three times as long and there are, simply, more rides); the outskirts of the Imperial Palace – we meant to take a tour but arrived slightly too late; the ground were pretty impressive however, and again, very serene; and went to the top of the Tokyo Metropolitan Building. The latter was very impressive: because it was the city hall, anyone could access the top floor for free, and it was only at the top of the building that you can get a true sense of just how endless the city is. Even in other cities, like atop the Empire State Buidling, you can see where the rurality begins. In Tokyo, 89 floors up, you can only see endless skyscrapers, punctuated by the lush green of Yoyogi Park and the vague outline of Mount Fuji in the distance.

It’s certainly unusual to say that I went shopping alone in Tokyo city centre one evening at the age of 16, but I did, quietly riding the train to Shinjuku and visiting a soccer shop where I bought a national soccer shirt for myself (a habit, at the time) and a J-Pulse jersey for my litle brother.

But even though all of the excursions were great, and it was magnificent to do some of what I did, and see some of what I saw, it wasn’t the sightseeing that I got most out of: it was the freedom to do as I wanted with other people. Japan was where I first got drunk: on the first of our spare evenings, some Dutch guys were passing our window, saw me happening to play the guitar, and invited us out to sit with them. ‘Them’ soon became a motley crew of all nationalities: Irish, Kiwi, Dutch, French, German, Balkan, Israeli, Italian, Mexican and from Macao – even the Hong Kong lot came out one night, all illegally drinking out in a beer-garden common area at our lodgings.

It was the best fun ever. Every night Michael would use his fake ID to get us four cans of Asahi each, and every night I would end up singing my heart out with Willem from the Netherlands, roaring whatever songs we would remember the words to. Call it a stereotype – the Irish guy doing the singing – but it was brilliant fun, with people who were all enjoying the thrill of being so far away from home, in somewhere not quite exotic, but rare, with only each other for company and the strangest of all international attributes in common.

Somewhere in between – I’d have difficulty placing just when – the results [5] were released.

The closing ceremony was painful. While none of the Irish had finished with medals, Diarmuid was one off a bronze, and having scored all seven points in one problem, was entitled to an ‘honourable mention’. It had to be the year, of course, that there was an unusual amount of medallists, and so their “We don’t have time today to list all of the honourable mentions. Sorry about that!” rang a little thinly.

What was so galling about the fact that I’d scored zero – which only 11 others managed to do, out of a total of 457 entrants – was that I honestly thought I’d made significant progress in two of the six problems. And because the ceremony was where everyone was given their awards, I had to sit through 90 minutes or more of everyone else going up to their podium, beaming, shaking hands with Crown Prince Naruhito, and generally being over the moon with their achievements.

Well, nearly everyone. The Chinese entrant of whom we’d heard the rumours earlier wasn’t there. Seeing his results, we realised what his teammates had been murmuring: it wasn’t the first time that he’d had a freakout and missed a question, destroying his self-esteem in the process. It was the second time… in two days. On both papers, he had scored 7-7-0, and while 35 would have been enough to secure a gold medal anyway, 28 slipped him into silver medal territory.

When his name was called for him to come and receive his silver medal, nobody got up. His medal was to forever remain unclaimed.

Outside, we all milled about, swapping souvenirs with each other as it would likely be the last time that a lot of us would see each other. Some were flying home that evening, while we were off first thing in the morning, and were planning to stay up all night singing/drinking/whatever so that we’d sleep through the flying. We met all of our drinking buddies, now mostly furnished with medals of various value draped around their necks. Some of them I was thrilled for, but for the most part I just sulked, and wept silently. 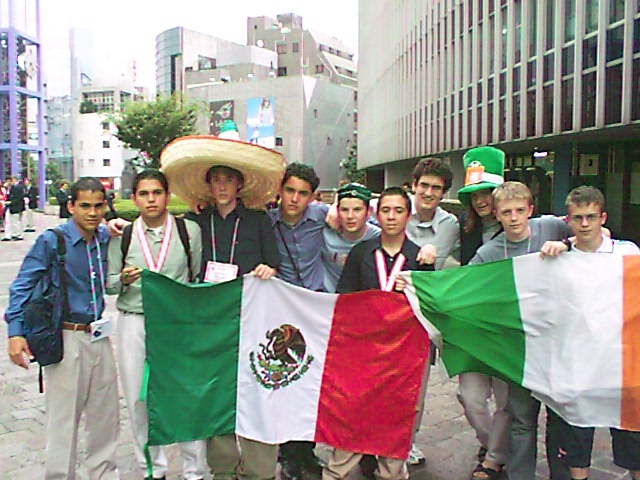 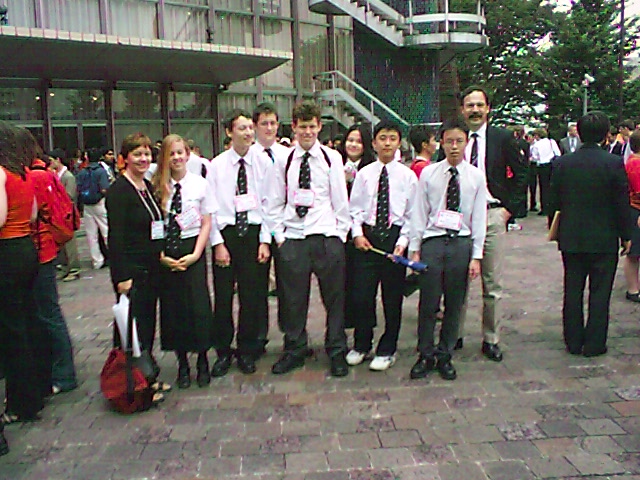 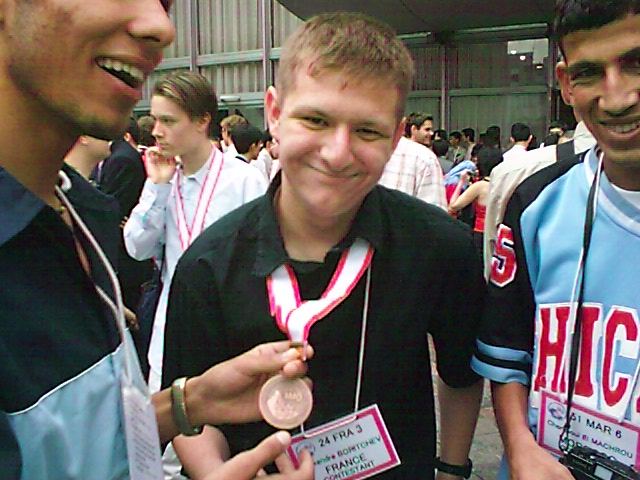 Sent to Japan by my country, to represent it. and I got drunk, learned nothing and scored zero.

I wasn’t going to let it happen again. 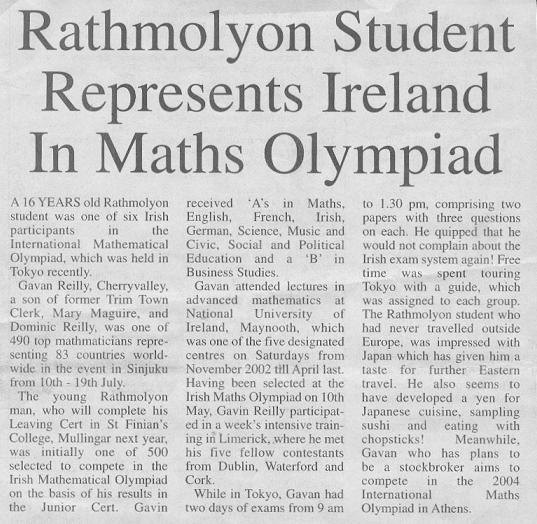 Note the last sentence: I was going back, and I wanted represent my country properly this time. And, in fairness, it’d be nice to say that I made the 2004 Athens Olympics, even if it wasn’t in the 100m sprint.

I spent most of September having pictures passed to me in the back of English class. Most of them depicted what my classmates envisaged to happen at the Maths Olympics: usually weak, limp-wristed pale teenagers scoring new world records of 1.4 metres in the calculator toss.

The letter came in November again: you are invited to return to training for the International Mathematical Olympiad, yadda yadda yadda, come back to Maynooth, kthxbai.

When I did, it was the first time that I’d seen Seamus and Paraic – the two guys I’d befriended at the previous year’s classes – since Japan. They were just as incredulous as I was: that waster made Japan?! Fair fucks to him! Seamus had done well the previous year at IrMO and had been invited to Limerick: there was a good chance he’d be joining me at IMO 2004.

Around the same time as I sat my Leaving Cert Mocks, in March 2004, we were offered a mock IMO paper, the first time that Maynooth had done so. Seamus, as he deserved to, topped the class with a stunning 67 – having missed the week where the papers were returned, I was shocked to hear I’d scored 64. Things were going well. Athens loomed large. I’d even taken to studying extra material during the week instead of keeping up-to-speed on my intra-curricular Leaving Cert material.

Lunchtime on Saturday 8th May 2004, and the sun shone brilliantly as Seamus and I strolled into Maynooth to get some chips. The first paper, we both thought, was fairly manageable. Neither of us really expected to match our mock results but we both felt that a 40 was on the cards. As we went back in for the second paper, it was just a matter of steady-as-she-goes.

At 4.55pm I was scribbling furiously. FIve minutes to go. I was nearly finished a problem asking to identify all the primes that satisfied a certain condition that currently escapeds my mind. I just about got all of my solutions listed before the paper needed to be clutched from my hands.

As absurd as it sounds, it was just as the first drops of light summer rain began to patter when the switch flicked in my brain. As strange as it will sound, I had managed to construct a rather elegant proof for the final question – the one with the primes – all based on the premise that certain numbers were prime to begin with.

If I cocked up a basic computation like that, I might not make it. I mightn’t deserve to either.

Congratulations on your recent performance in the Irish Mathematical Olympiad. As you will see from the attached list overleaf, you finished in 12th  place, and all of the IMO volunteers and staff of the Mathematical Faculty of the National University of Ireland, Maynooth, offer their sincere congratulations.

You will also be happy to hear that Seamus O’Boyle, who attended the sessions in Maynooth, finished the Irish Mathematical Olympiad in third place and has qualified for the 44th International Mathematical Olympiad. (Someone else) also finished in eighth place, and it is wonderful for NUI Maynooth to have produced two high finishers as Seamus and (whoever).

Thank you very much for your participation this year and if you are still a pre-University student next year we will be delighted to see you returning to our classes next year.

Again, Gavan , thank you for your participation.

With that muted letter ends my Olympic story. While it’s not the traditional Olympic story, it’s the one I managed to conjure for myself, and the only one I have. 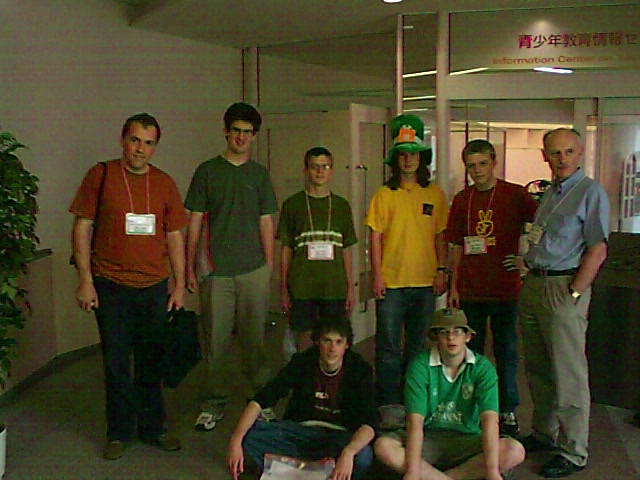 That is my story: one of triumph and despair, of victory and defeat, but – most importantly – of the experience had, the road travelled, the world no longer unknown.

What else would you expect of an Olympic story?