First of all, let none of what I say take away from the fact that Oasis were simply awesome, and are still effortlessly brilliant at the top of their game. So musically, Slane was fine.

I had never been to Slane before, a shameful fact for a concert-going Meathman, and despite having had tickets to see Oasis at four various intervals before – Lansdowne Roads, Witnnesses, etc – and only making it to one of those gigs, an epic at The Point in December 2005, when the tickets came up this time I simply had to go. An open air gig with 80,000 other people, seeing perhaps my favourite band of all time… what could go wrong?

Organisationally, Slane 2009 was an absolute shambles.

That’s what I said at 3am, and I don’t feel much better now, even after getting about 10 hours of sleep.

If you’ve ever been to open-air gigs in Marlay Park or the Phoenix Park, or (as I’m told) at Oxegen, you’ll be familiar with the general modus operandi of Dublin Bus. They park all their vehicles in one field, which is clearly signposted and displayed on the way out of the venue. If you want one of said buses, you walk into the field, buy a ticket if you need to, and go to the nearest available bus. Once this bus is full, it drives away, and thus the volume of bus traffic on the roads is economised as much as possible.

Now Slane, I should concede, isn’t in the middle of a larger urban area, and so it doesn’t have a vast array of public transport that you can take there anyway. It’s a rural setting, with rural roads prepared only for everyday rural traffic. Country roads aren’t meant to carry 80,000 people but that’s not Slane’s fault and they shouldn’t be blamed for it.

Where Slane and MCD need to take blame, though, is for not making the best of the bad hand the setting deals them. Instead of the tried-and-tested Dublin Bus formula mentioned above – which, incidentally, are all venues or festivals operated by MCD, so they can’t claim not to have any organisational experience or capability – what happens in Slane is sheer amateurism. Buses dropping people mid-road on the way down is acceptable; with the human traffic and the width of the roads it is simply impractical to do any better. But on the way out, instead of the usual formula, buses – and I don’t blame Dublin Bus or Bus Éireann here, I blame MCD and the Gardaí – are simply parked on the sides of the same narrow road, and set off on the road back to Dublin when full.

The problem here, of course, and the problem Ciara and I fell into, is that because we made a point of walking quickly as soon as the gig finished, and getting into one of the first Bus Éireann vehicles – a bus we were shepherded into by the staff on duty, we ended up trapped behind other parked buses further, hemmed in by human traffic, and sardined in with nowhere to go. Instead of sending us further down the road so as to keep the road as empty as possible, the organisers made a bad situation worse. Why not rent a road and have all the buses sitting in it, keeping the road as empty as possible? It wouldn’t be difficult, expensive or resource-heavy. Send the Bus Éireann travellers one way, the Dublin Bus users in another, and keep the road empty of all traffic except for the filled-up buses. Don’t put us all in one direction and then handicap those of us who get out early by making us the last ones to hit the open road. The music finished just before 11; after the long walk (again, not the venue’s fault) back to the bus, we boarded our vehicle at 11.40pm and the engine revved up only five minutes later. Great, we thought, we might be back in Dublin before 1.

Sadly, inevitably, we ended up moving about 500m within the first two hours, another 2km in the following, and only hit the M2 back to Dublin at about 3. We arrived on Bachelor’s Walk at 4.05pm, nearly four and a half hours after we boarded, on a bus largely desperate to find a toilet and universally hungry, pissed off that they now couldn’t get a taxi or Nitelink home (4am is taxi blackout territory; it’s when everyone’s getting home from nightclubs), and wondering if they’d ever bother going to Slane again. Walking home, we made it in the door at 4.50am, six hours after the music had finished. This would be acceptable if we’d lived somewhere rural and had to accept a long trudge home, but not when we live in Dublin City Centre with the best public transport coverage anywhere in the country.

Just in case you think I managed to get particularly unlucky, or am turning crackpot at my Bus Éireann cabin fever, do a Twitter Search for “Slane bus” [1]. 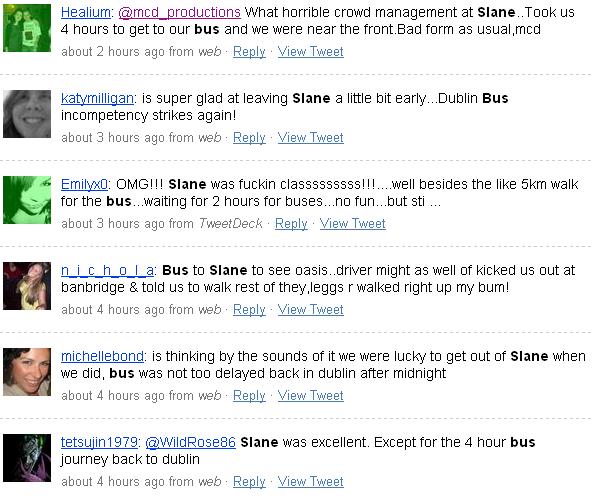 And another thing – I understand that without limits, people – and especially Irish people – go a little mad with their alcohol. But when you’re dealing with 80,000 people and you only have three bars, going beyond the usual four-pints-per-person rule and only giving each person two drinks at a time, and causing such a backlog that people end up queueing to get into a queue for drinks, is bad management.

Overall, Slane isn’t a bad musical venue. It’s not a brilliant one, but it’s forged itself a tradition and set a new standard for open-air concerts in Ireland in the 25 years since its first gig. There’s only been three gigs there in the last six summers, though, and one has to wonder whether it’s either that Slane have gotten out of practice, or whether Ireland has just gotten used to better treatment at its concerts. I can’t help thinking, though, that Slane would be a much better gig if there were 20,000 fewer people at it. Causing people to double up in queues for drinks, hindering the flow of human traffic pretty much everywhere in the venue, is simply bad practice. Not having any system organised for buses, though, is just plain stupidity.

Oasis were brilliant, but if another gig comes up at Slane and I can’t be sure that I’ll get home before it turns bright again, or if I have to spend four and a half hours on a bus with no toilet and no food, and end up on Twitter in bed at 5am like I did below, I might vote with my feet and spend €85 on a ticket for something else. And it might just be me, but with online petitions springing up today [2] complaining about the length of queues and everything else, I might not be the only one. 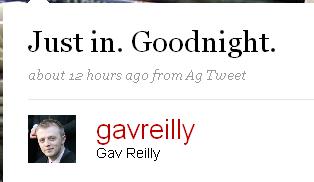